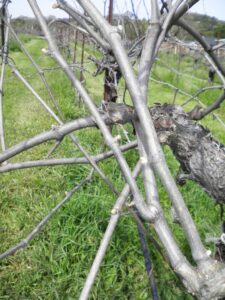 During winter, from December through sometime in February or early March, depending on the weather, vines here are dormant.  Once the ground temperature warms to about fifty degrees F in the spring, the vines get active and the buds that formed during the previous growing season begin to swell.  Soon after they burst open, leaves pop out, and the current growing season gets under way.

If left alone the hundreds of buds on each vine all set forth shoots and flower clusters that will become clusters of grapes.  It’s a jungle!  Although this would serve to further the plant’s future, by producing grapes, and seeds, it makes for lousy wine.  To further the species, grapes only need to get sweet enough to make animals want to eat them, thereby spreading seeds around in their droppings.  Good wine requires fully mature fruit, much sweeter than wild growing vines would produce.  We prefer relatively low sugar fruit, compared to most, but still riper than unkempt vines will produce.  The dense, dark, humid tangle of unhampered fecundity also creates ideal conditions for fungal diseases.  It’s necessary to reduce the number of buds sometime prior to budbreak.  Fewer buds mean fewer shoots and fewer clusters but those fewer grapes will be more suitable for quality wine come harvest time.  That’s why we prune.  In large vineyards, where pruning is a huge job that takes many people weeks to do, the work begins as soon as the vines are fully dormant, in January.  Our little vineyard takes me only two days to prune, with Dad helping.

Spring frost can be a serious problem in Napa.  In 2008 we made eight gallons of Syrah instead of the normal 120 gallons. Several successive frost events in April were responsible. The later you prune, the later the vines come out of dormancy, up to a point.  Late pruning might buy you a one or two week delay in budbreak.   If that’s enough to get you past the last frost, that’s HUGE.  Since we don’t have overhead sprinklers or vineyard fans, the two most effective means of frost protection, late pruning is our only option.  So we delay pruning until the buds have begun to swell, just prior to budbreak.  If we wait too long, until the green growth is sprouting out of the opened bud, we risk damaging the nascent shoots and flower clusters, meaning no grapes come October.  The brush of a finger can knock them right off the vine.

There are many ways to train and prune a grapevine.  We use a system of head training in conjunction with spur pruning.  This is a traditional style of pruning commonly seen in old Zinfandel vineyards.  The vine trunk has six to twelve arms, the end of each arm being the growing position, where the annual growth and fruit bearing takes place, and where the pruning happens.  “Spur” refers to the short, spur-like stub remaining after the rest of the cane is pruned away.  That spur will have one to three buds on it, out of the dozen or so buds on the full  length of the cane.  The cane grew during the previous growing season, and bore probably two clusters of grapes.  Each of the buds on that cane contains within it the tiny primordial structures that will become the shoots and flowers of the upcoming season.

The most common training and pruning

method in Napa is called cordon training, with spur pruning.  The trunk either is trained into two arms running parallel to the ground in opposing directions along the cordon wire, like the letter “T”, bilateral cordon, or is bent over to run horizontally along the cordon wire, unilateral cordon.  Every six to ten inches along the cordon is a growing position, which is pruned back to the one to three bud spur each winter. This method is suited to training the growing shoots up between sets of horizontal wires, the trellis system, that make the canopy look like a narrow green hedge.  That is a vertical shoot position, or VSP, trellis.

The other major category of pruning method is called cane pruning.  Instead of pruning off most of the length of every cane, leaving a short spur at each of the ten or twelve growing positions, one, two, or more canes are selected and left almost full length, with the other canes removed entirely.  These canes are called fruiting canes, because they will bear the coming season’s grapes.  Two short spurs are also left to grow canes for the following season.  Cane pruning is used on smaller-clustered varieties.  It allows a lot more control over the number of buds and therefore clusters of grapes.  However, it is more difficult to learn and do, and slower, so has become much less common than it used to be.

Whether we spur prune or cane prune, we remove about ninety percent of the last season’s growth.  So instead of hundreds of buds each putting forth shoots and fruit in a wild dank tangle, each vine has twenty or so buds, and we hope ultimately twenty to forty clusters of wine grapes, basking in dappled sunlight, caressed by gentle breezes.  What a lovely thought.

Life’s a jungle; your vineyard shouldn’t be.

This entry was posted in Uncategorized. Bookmark the permalink.